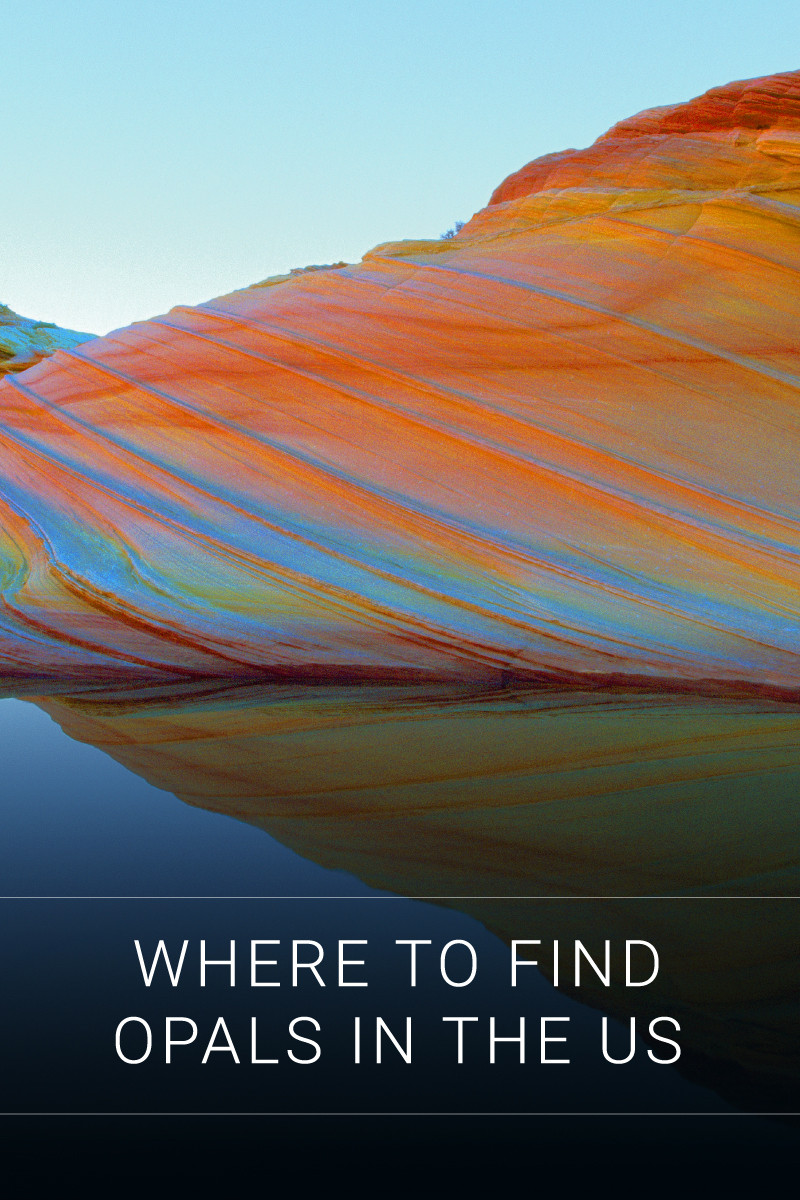 When early settlers migrated west to pan for gold in early American boomtowns, they may have also encountered another treasure hidden in the earth: opals! That’s right, if you thought opals were confined to the abundant deposits in Australia, think again.

While it’s true that Australia is the leading source for opals worldwide, followed by Ethiopia, the US has a humble but steady supply, too. The US supplies only a fraction compared to other sources like Australia, Ethiopia, Brazil, and Mexico, but the western canyons and valleys are lined with small opal mines. Today, many mines are still active while others have long since closed, but their treasures still sell in the market.

Here’s a quick overview of where to find American opals in the USA:

Before we dive into each of these states, let’s go over some of the opal varieties you’ll encounter in the US.

Types of Opals Found in the USA

American opals come from several states in western USA, where volcanic rocks in remote mountains and valleys along the Western Trail from California to Washington supply varieties like black opal, fire opal, common opal, and more.

However, Nevada is the leading American supplier for opals. On the whole, the United States produces around $90,000 of opal annually.

Most of these opals are found in western USA, with many opal mines open to the public. Next, we’ll look at the mines dotting the Western regions of the US.

Can you find black opal in the US? You bet! It’s clear that Nevada is the best place to find opal in the US, thanks to the world-famous Virgin Valley opal, a remote, fruitful mining district supplying some of the world’s finest black opals.

In Northern Nevada nestled against the border of Oregon, a conglomeration of three high-producing Virgin Valley opal mines line the high desert valleys along the Sheldon National Wildlife Refuge, including: 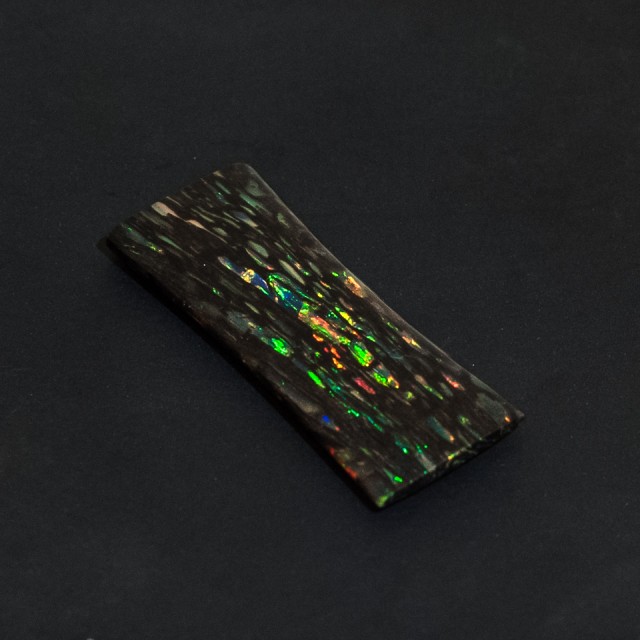 While Nevada tends to be associated with gambling and the famous Las Vegas strip, there’s much more to be discovered! The vast 68,000-acre valleys encompass the heart of the Old West and its rich prospecting history. The region teems with common opal, but a few small deposits supply precious black opal, known as some of the finest opals in the world.

Tourists can visit this opal mecca during the mining season, from May to November. If you’re wondering what makes Nevada’s opals so prestigious, it's their vivid array of colors. Additionally, the world’s largest precious opal was unearthed in the Royal Peacock Mine!

Despite Nevada’s surplus of common opal, most are unsuitable for gems due to their crazing and cracking. These fragile stones cannot be cut or polished. That said, they make for stunning display gems sold to museums and rock shops for collectors and home decor.

Since Nevada’s opal boom straddles the Oregon border, let’s look at “the beaver state” next. 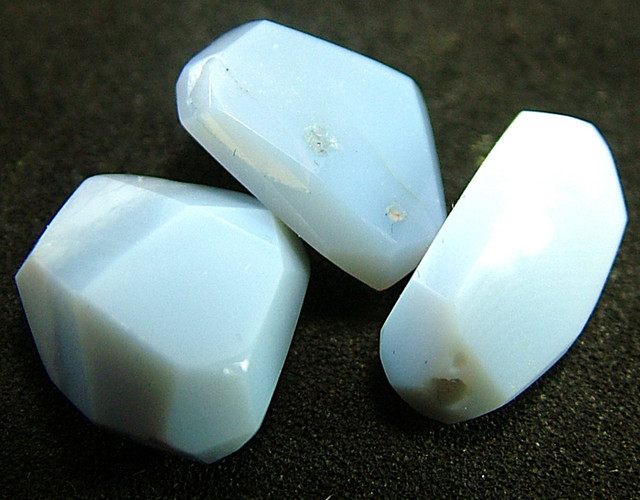 Opals hide in rhyolite geode mineraloids that form in low-temperature silicon dioxide cracks in the earth. Oregon has its very own variety of opals called “Thunderegg.” These opals are found in stunning geodes, rocks that look unassuming outside but explode with color and diversity within.

Where can you find opals in Oregon? Counties across the state have small opal mines. The leading supplier of Oregon opals is the Juniper Ridge Opal mine, a “fee dig” site where visitors and miners can pay a fee, undergo training, and start mining! Any findings unearthed are yours to keep!

Another prominent locality is the Opal Butte mine in Morrow County that’s been active since 1988. Over in Klamath County, you’ll find Opal Creekand Klamath Falls, a small but active opal mine. 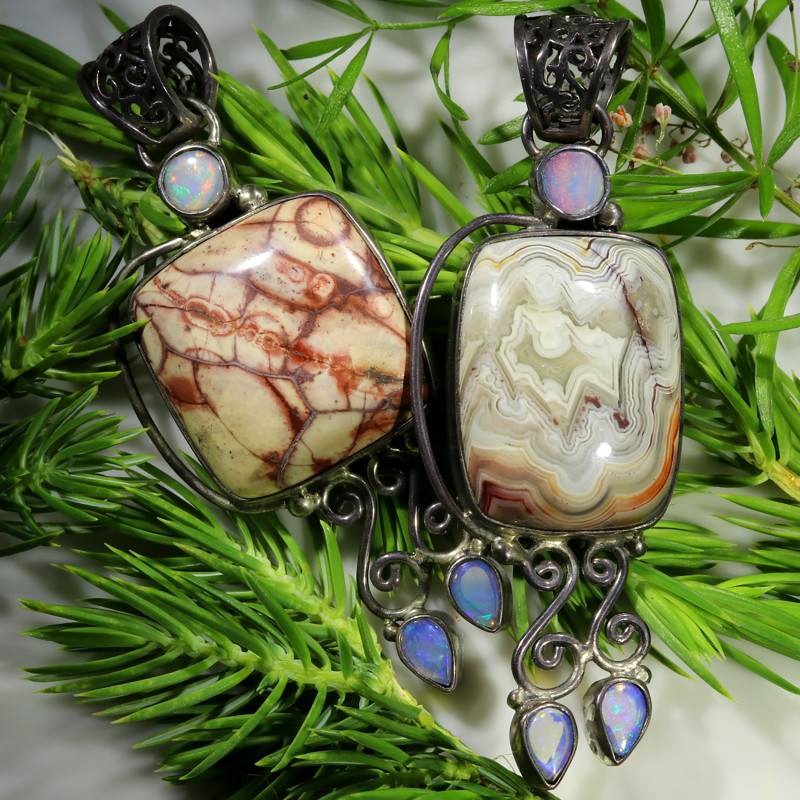 Heading east from California, you’ll find a famous agate mine that’s known to unearth opals. Most notably are the Mule Mountains, home to the Opal Hill Mine in the Palo Verde region. The quantity of opals discovered here is unrecorded, but opals often surface while mining for desirable agates. 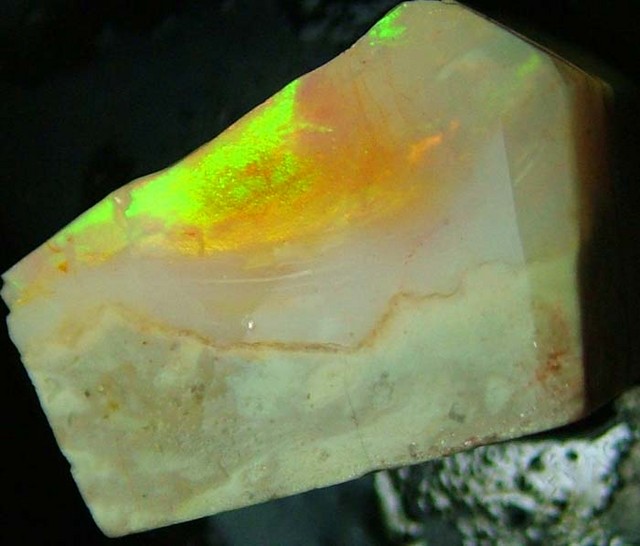 Idaho is a world-renowned gem state thanks to its geologic diversity, attracting rockhounds near and far to collect across the rich lands. The state produces a vibrant portfolio of gems, from agate to diamonds, and of course, opals!. Idaho opals include:

Ancient volcanic rocks and geysers supply Idaho’s opals. Geysers would erupt throughout millions of years, surfacing silica spheres in the liquid lined with layers of precious opal. While the color bar is thin, these opals are most commonly used to make opal triplets.

Where do you find opals in Idaho? The most prominent regions include the Spencer Opal Mine, Willow Creek, Pahsimeroi Valley, Poison Creek, the Moscow Opal Mines, and Clover Creek. 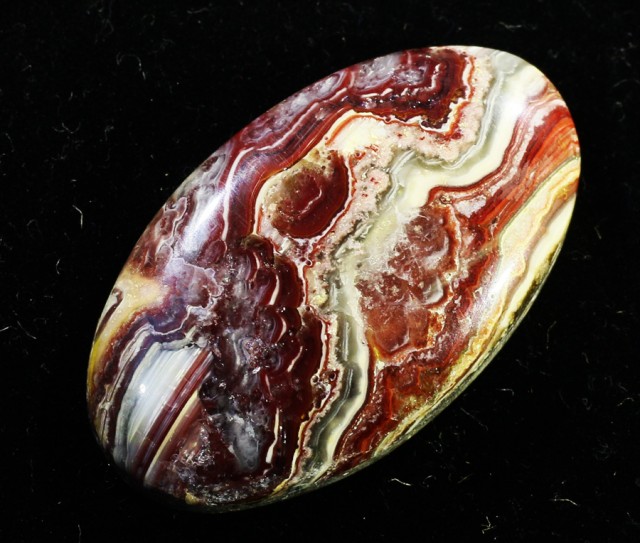 Utah is a sprawling Mountain West state bordering Colorado, Wyoming, Idaho, Arizona, and Nevada. Because it’s nestled between three states producing American opals (Arizona, Nevada, and Idaho), it’s only fitting that Utah also has opals. However, these opals are an entity all their own, thanks to their unique banding. We can thank the geothermal activity underground for forming such a fantastic American opal variety!

Also called Bacon Opals, or Candy Strop Opals, Utah opals exhibit a unique striping akin to a strip of bacon meat. Warm hues of red, yellow, and green line these slabs and specimens. While Utah isn’t a leading supplier of opals, they spring up from regions across the state.

However, the most notable locale is the Opal Gemstone Mine in Milford, a rockhounding site in the Antelope-Roosevelt Hot Springs Mining District treasured by collectors eager to see one of the most unique American opal varieties in the world.

The Mine has since closed, and production was small when it was active, but Utah opals still circulate throughout the opal market as a novelty. 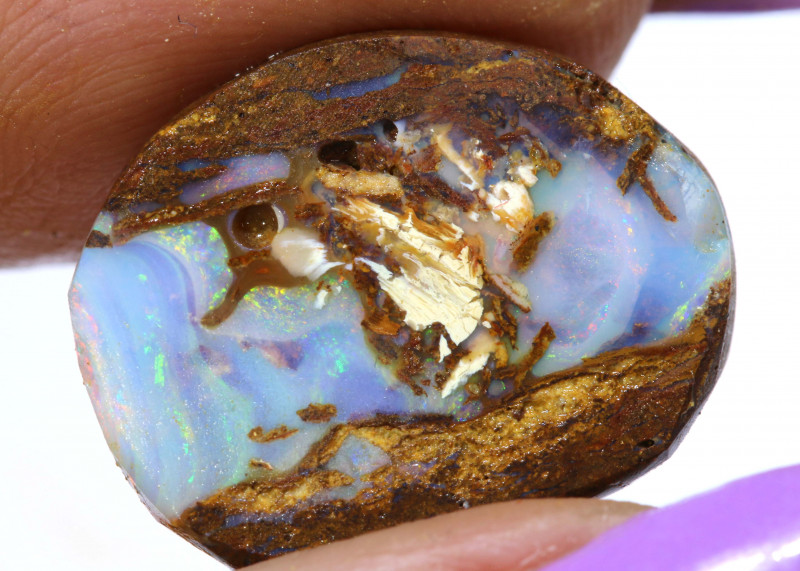 The northernmost western state of Washington abundantly produces gemstones like agates, carnelians, and bloodstones. However, you can also find American opals in Washington State!

A treasure unique to Washington is opalized wood specimens. When wood buries into soil, mineralized water and low oxygen create a fascinating process called permineralization. Rather than decomposing, silica preserves the wood tissues, transforming them into opalized wood fossils.

Besides these remarkable treasures, you can also find common opal in Washington, although production levels are minimal, despite the demand and interest.

Washington Opals are rare and elusive but can be found in the following regions:

And that wraps up the western sources, but where else can we find opal in the US? 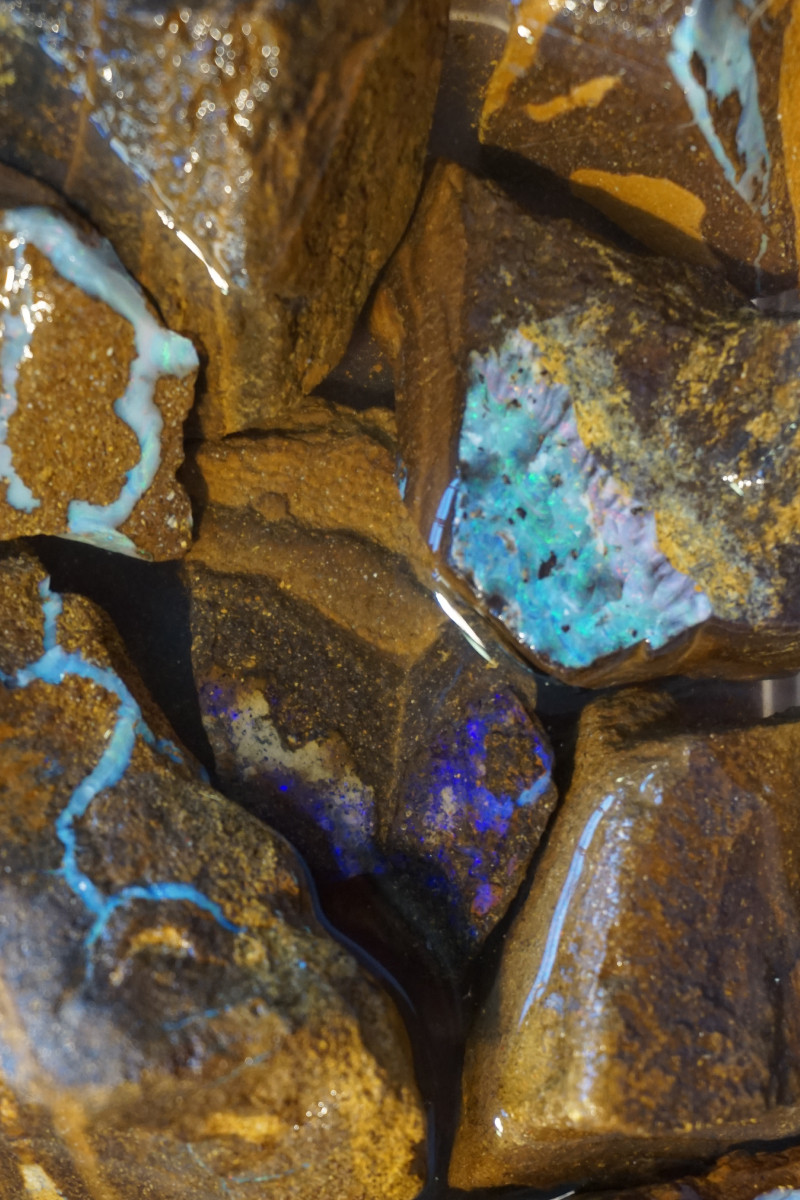 Arkansas might not be the most prominent state to supply gemstones in the US, but it deserves mention on this list of American opal sites. In the late 19th century, people flocked to Arkansas to join the booming pearl rush. Over in Murfreesboro, Crater of Diamonds State Park supplies a respectable amount of diamonds. In addition to a variety of quartz species, Arkansas also has a small source of opals.

Arkansas ranks third for gemstone production ($4.89 million) in the United States, and there are several regions to find opal, including the Potash Sulphur Springs in Garland County. Arkansas opal types include dendritic opal, precious fire opal, and throughout Eastern and Southern Arkansas, opalized wood is present in hyaline opal. 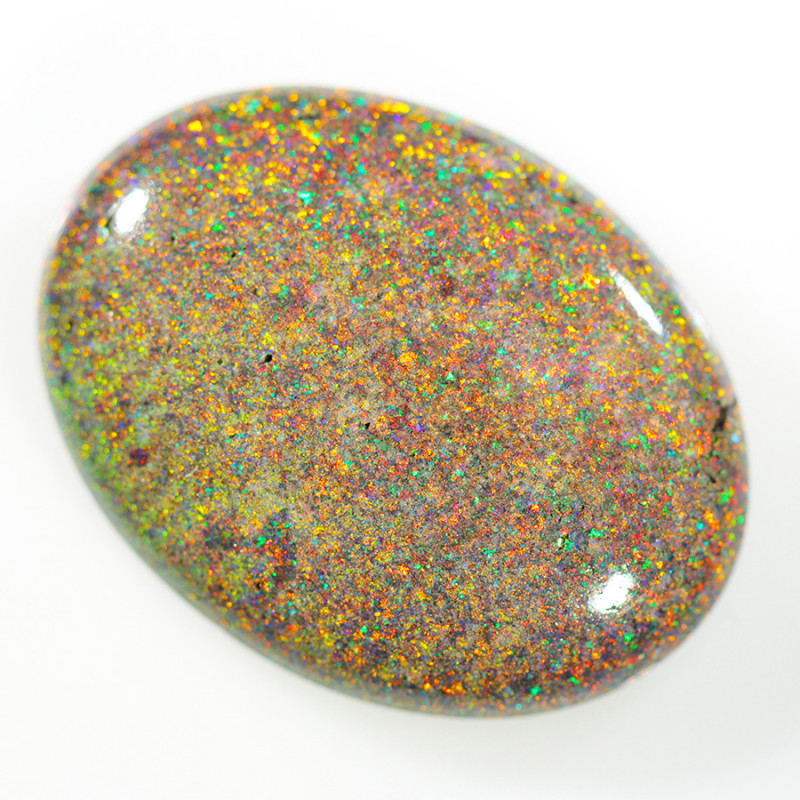 Are you wondering, can opal be found in Louisiana of all states? The answer is yes, and it’s called Louisiana Sand Opal. These rare opal types are a type of sandstone once mined in the Catahoula Formation in Leesville.

Louisiana Sand Opal forms when sand grains band together with clear opal. Once the specimen is exposed to sun rays, the mixed composition displays a radiant play of color in vivid speckles of purples, blues, and greens. The most desired Louisiana opals have a dark body tone to best exhibit the stone’s play of color.

Louisiana opal mining is historically small in production, with prominence rising and dwindling in the 1980s-90s. This means that Louisiana opal is exceedingly rare and elusive. But there is another type of Louisiana opal that’s much more abundant: Louisiana Palm Wood.

Like Washington’s opalized wood, Louisiana Palm Wood is a form of opalized fallen palm wood, which isn’t actually a true wood grain. Instead, palm wood is a fibrous material found in localized plants. As the palms deteriorated into underground water, silica grew and hardened into petrified palm opal.

If you’re in the market for Louisiana opal, palm wood is your best bet! 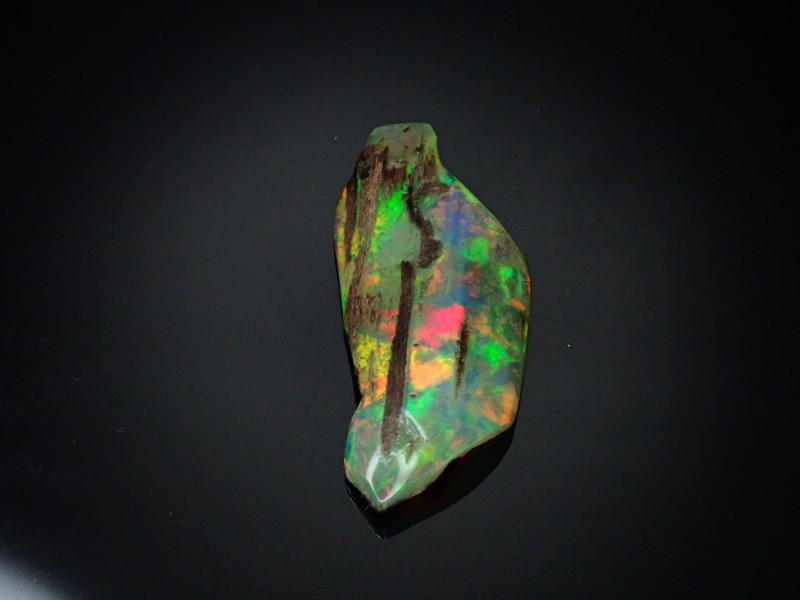 Are Opals Sold in the US?

And that wraps up our tour of American opal found in the US! The United States may never contend with Australia for opal production, but as you can see, rare and novelty opal varieties exist from sea to shining sea. Of course, the American west is the most prominent region for American opals, but branch out east, and you’ll also find unique varieties. Are you ready to get your hands on a relic from the Old West? 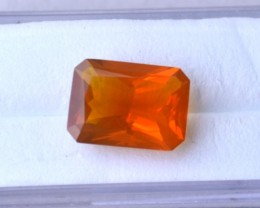 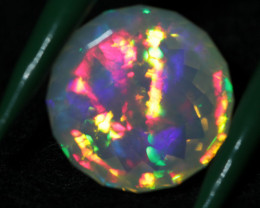 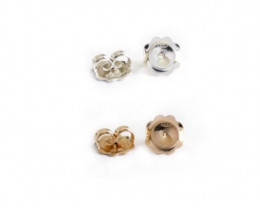 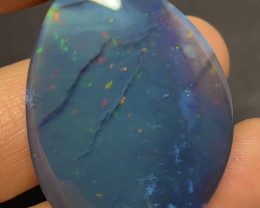 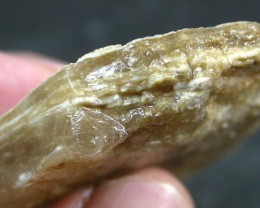