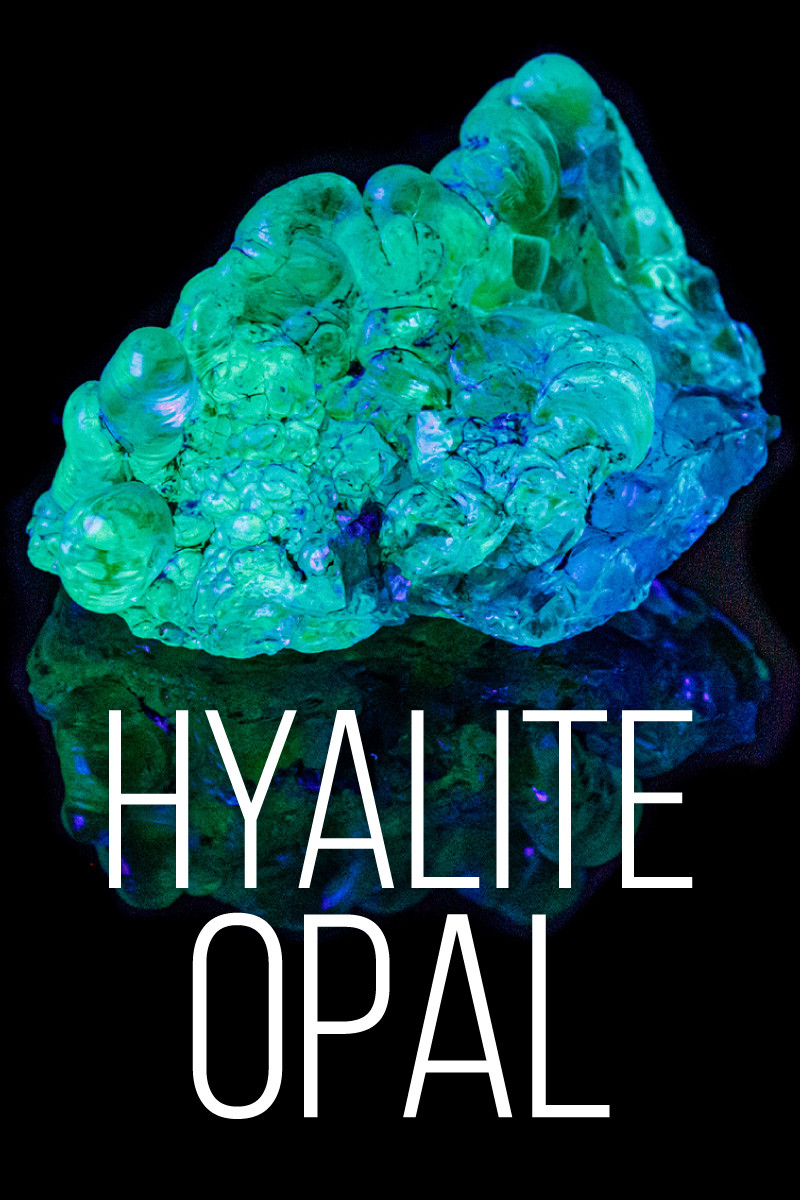 Close your eyes and imagine the striking sparkle of a diamond. Now, add a clear, bubble-wrap-looking shape to that shine. Voilà, you have a raw hyalite opal!

There’s something truly special about this opal type. Maybe it’s the classy, glass-like color of its basic form or perhaps the heavenly glow accompanying some of the rarer varieties.

Maybe it’s something deeper and enigmatic, which wouldn’t be surprising considering all the hyalite opal metaphysical properties.

But what is it that makes hyalite opal stand out? As a class of gemstones, opals channel purity, innocence, and hope. Hyalite opals do too, but their glass-like radiance and rare fluorescence are reminiscent of more than just hope. Prophetical, spiritual insight and divine intervention might come to mind instead.

Enough gushing! You must be itching to know about the hyalite opal meaning, and you’re probably wondering, “what does hyalite opal do?”

We’ll get into all of it, including the hyalite opal properties, hyalite opal value, and every other juicy detail about this immaculate opal. 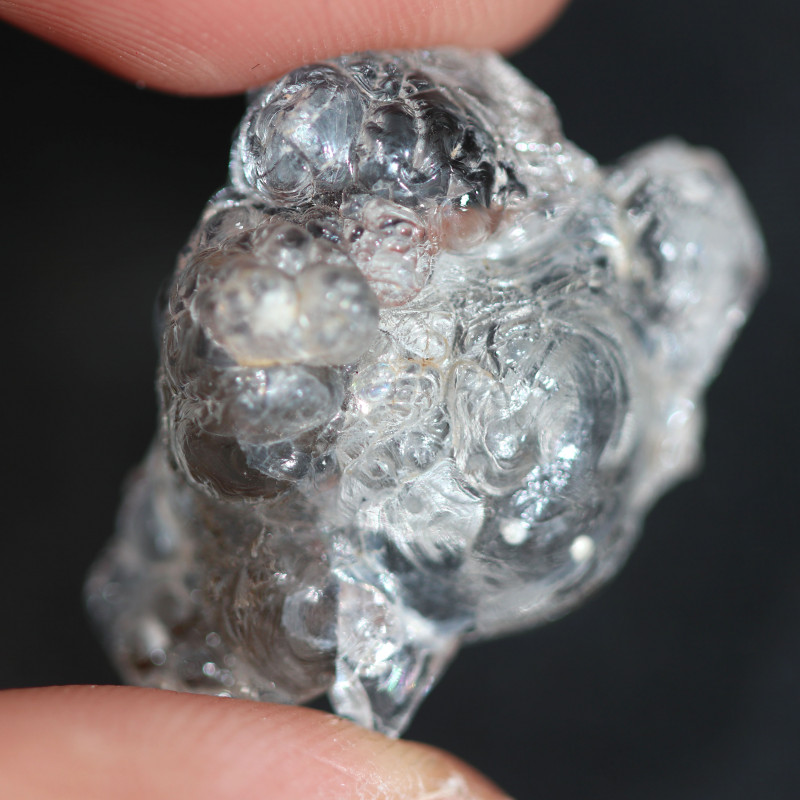 Hyalite opal gets its name from the Greek word hialos, which means “glass.” The Greek word opallios inspires the second part of the name, opal, and means “precious stone.”

German geologist Abraham Gottlob Werner, the first geologist who came across hyalite opal in the late 1700s, used these Greek words to name the opal. Of course, the history of opals tells us other opal varieties have been around for thousands of years.

There are many names for hyalite opal. We’ve heard names like “waterstone,” “bacon opal,” and even “candy opal.” But what’s with the food connotations? What is bacon opal? What is candy opal? 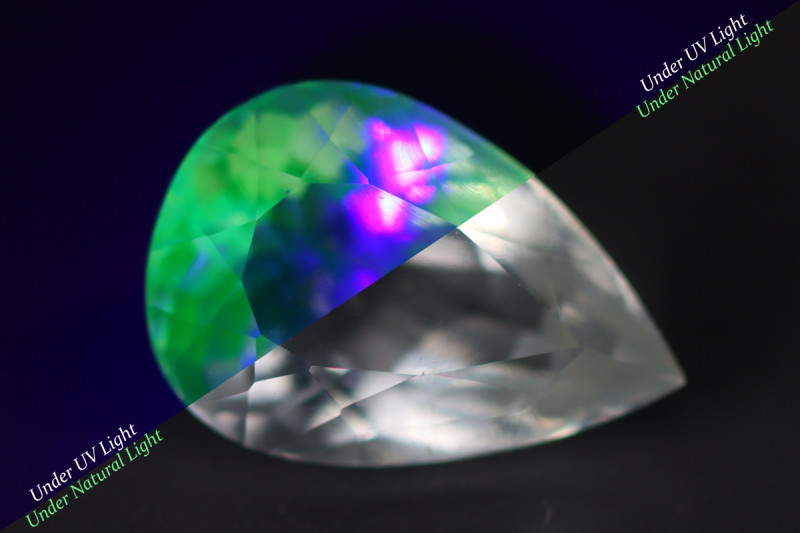 Hyalite opals share mostly the same composition as other opals, specifically in their bodies’ mixture of water and silicon dioxide. However, hyalite opals differ in a few ways. For one, they don’t have the same internal mineral structure as the average opal; the mini spheres that cause the play of color in precious opals are absent in hyalite.

However, hyalite opal fluorescence is something of a dream. Do opals fluoresce? Hyalite opals do, displaying a dramatic change in color if placed under short-wave UV light. That’s where you’ll see the glows of rarer green and blue hyalite opals.

But how does this fluorescence appear? And does all hyalite opal glow? The answer is in the October birthstone’s formation.

Throughout its formation, water dehydrates and the hyalite opal’s silica leaves a gel that hardens over many years. Other elements enter the stone in those formative years, like aluminum, iron, and even uranium.

In fact, it’s the presence of uranium that gives some hyalite opals fluorescence.

We know what you’re thinking… uranium means radioactivity — that sounds dangerous. But is hyalite opal dangerous? Good news: while uranium gives rare hyalite opals their color, the stones aren’t actually dangerous. The amount and type of uranium in the stone is astronomically small, and fully contained within the crystal. 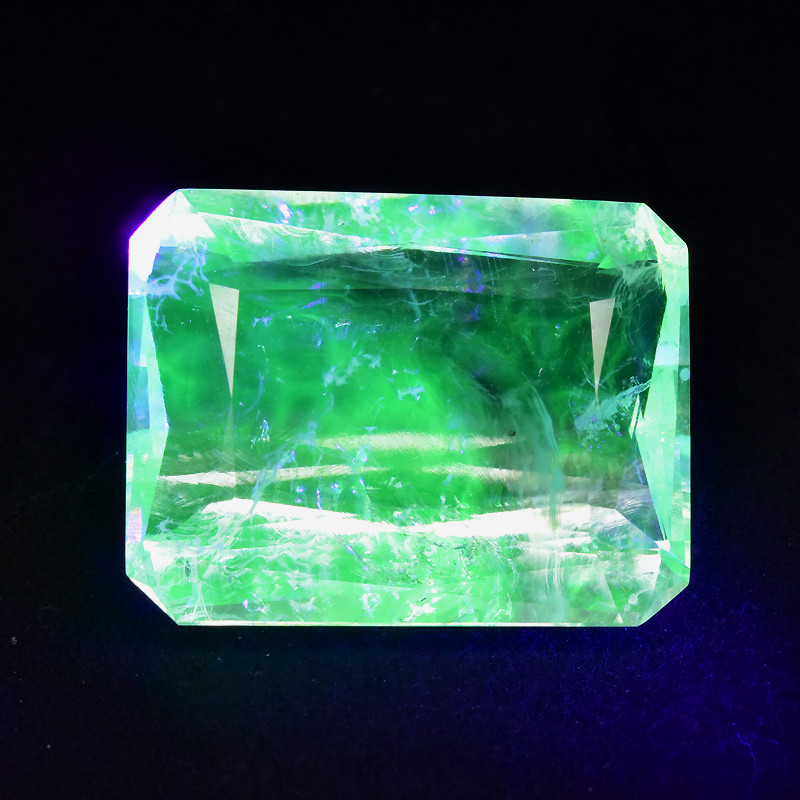 A raw hyalite opal is so striking that its organic shape is enough to command attention. That’s why many hyalite opals are left uncut in their original geode form. You might see these large geodes in occult shops or in modern, artsy living rooms.

In terms of clarity for hyalite opals, the clearer, the better. You can expect the more transparent specimens to be cut into soft cabochons.

Now, if a hyalite opal displays that ethereal fluorescence we mentioned, that's when the lapidarists (gem cutters) come out to play! If a lapidarist gets their hands on a large, transparent, and fluorescent hyalite opal, they’ll cut them into a gorgeous, faceted gemstone. The facets will accentuate the stone’s fluorescence.

Keep in mind, a faceted hyalite opal is rare and expensive. Most hyalite opals don’t weigh more than 1 carat. Faceting the stone wastes 60-80% of its material, so this cut is only reserved for the largest, rarest specimens.

So, where can we find these special hyalite opals? 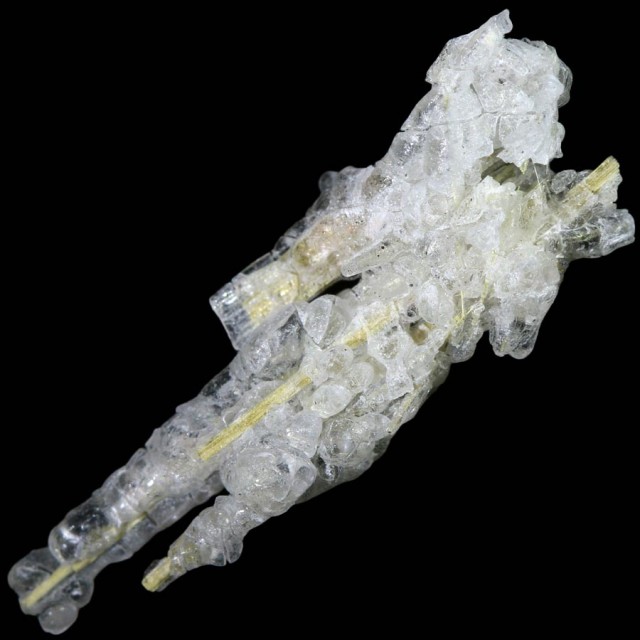 Luckily, you can find raw hyalite opal all over the world. But once you’re in those locations, don’t expect to just stumble upon a hyalite opal geode. You’ll have to look in pegmatite pockets, fumaroles, and volcanic cavities to access these pretty stones.

Where is hyalite found?

If we can find hyalite opal in so many places, how does that affect hyalite opal value? We’ll get into that next!

You can find average, colorless hyalite opal at reasonable prices, with some 5-ct specimens starting at $30. Not bad, right? Those are for your average, run-of-the-mill hyalite opals, though these are still beautiful!

If we get into fluorescent hyalite opals, we’re moving into a different price range — hundreds if not thousands of dollars higher. The more dramatic the fluorescence, the more valuable the hyalite opal.

Alright, so we know hyalite opals can be pricy or reasonable, depending on their appearance. Value can also lie in its uses, however. On the metaphysical side, what does hyalite opal do? 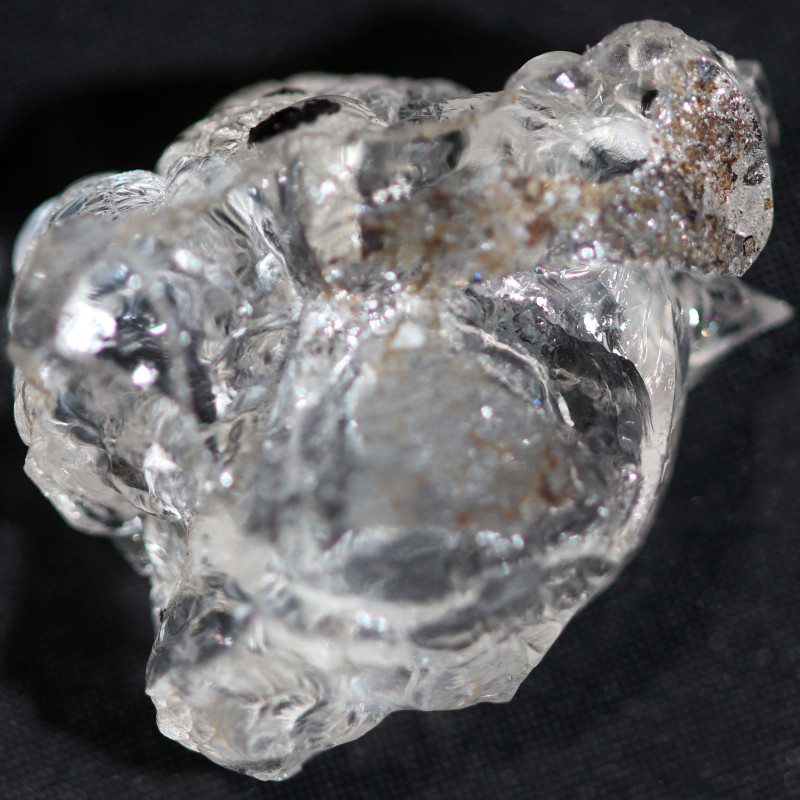 Let’s put these magical gems to work! You’ll be awed at the many ways hyalite opals can help us physically, mentally, and spiritually.

Hold a clear, glassy hyalite opal nearby to get your focus back, or channel of its other emotional benefits like:

Hyalite opal also goes by the name “waterstone.” Crystal healers believe that hyalite opals influence our bodies’ water content, supporting us with hydration that improves our eyes, skin, and hair.

Opals connect to your crown chakra, enhancing creativity and mental clarity. If you’re experiencing some brain fog, you might just need a touch of hyalite’s transparency to clear things up.

It’s also important to note that a hyalite opal’s color can influence the chakra it connects with. While most clear stones connect with your crown chakra, a rare green hyalite opal corresponds to the green aura of your heart chakra!

Opals are also known for supporting your love life. Known as passionate stones, opals are thought to enhance your ability to attract a partner with lust and seduction. So if you’re feeling yourself and hoping to meet someone special, try to get your hands on a rare green hyalite opal! Ooh la la!

So how can you channel all of the hyalite opal’s loving, healing vibes? Through both hyalite opal jewelry and decoration! 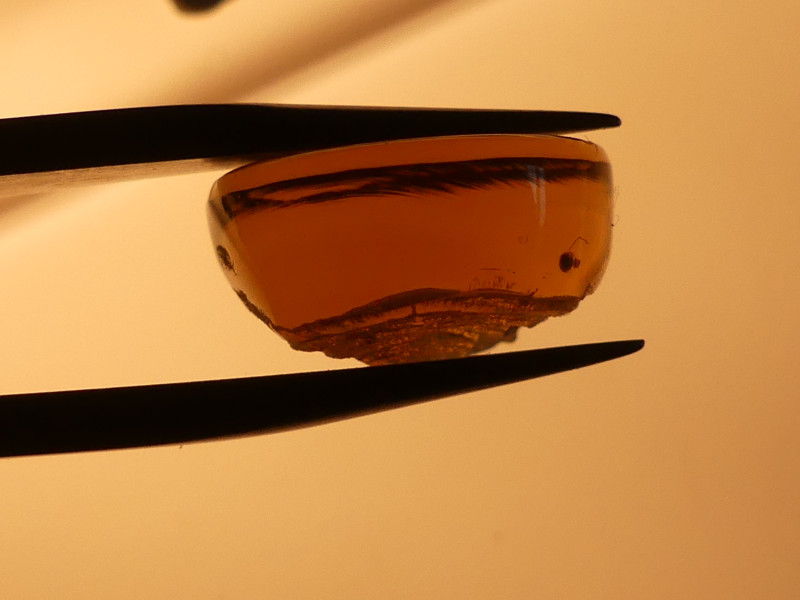 Hyalite, like other opals, sports a meek 5.5-6.5 ranking on the Mohs mineral hardness scale. This makes them quite delicate, so we recommend looking for protective settings when shopping for hyalite opal jewelry and knowing the proper opal care methods after purchasing.

Most polished and tumbled hyalite opals are quite small, so you won’t often find a hyalite opal ring or pendant unless we’re talking about a rough, raw hyalite opal. Earrings are more common and better suited for the stone’s size. You could also sport an opal ring with two small hyalite opals as accent stones surrounding another gem. Gorgeous!

Light Up the Room with Hyalite Opals!

Hyalite opals highlight some of the most beautiful and curious attributes of the beloved opal gemstone. With literal radioactivity (the harmless kind), stunning fluorescence, and glass-like clarity, you’ll fall in love with any piece of hyalite you come across.

Ready to shop for hyalite opal? Find your favorite here! 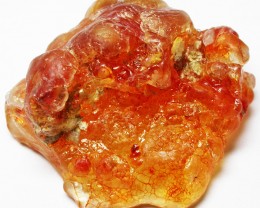 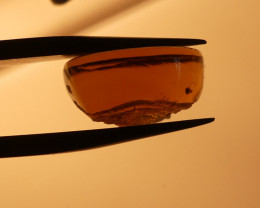 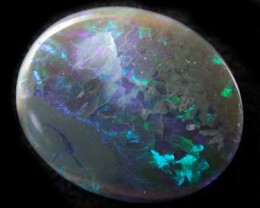 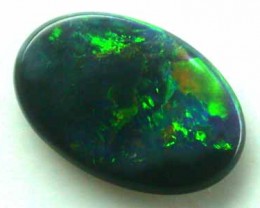 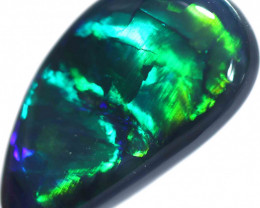